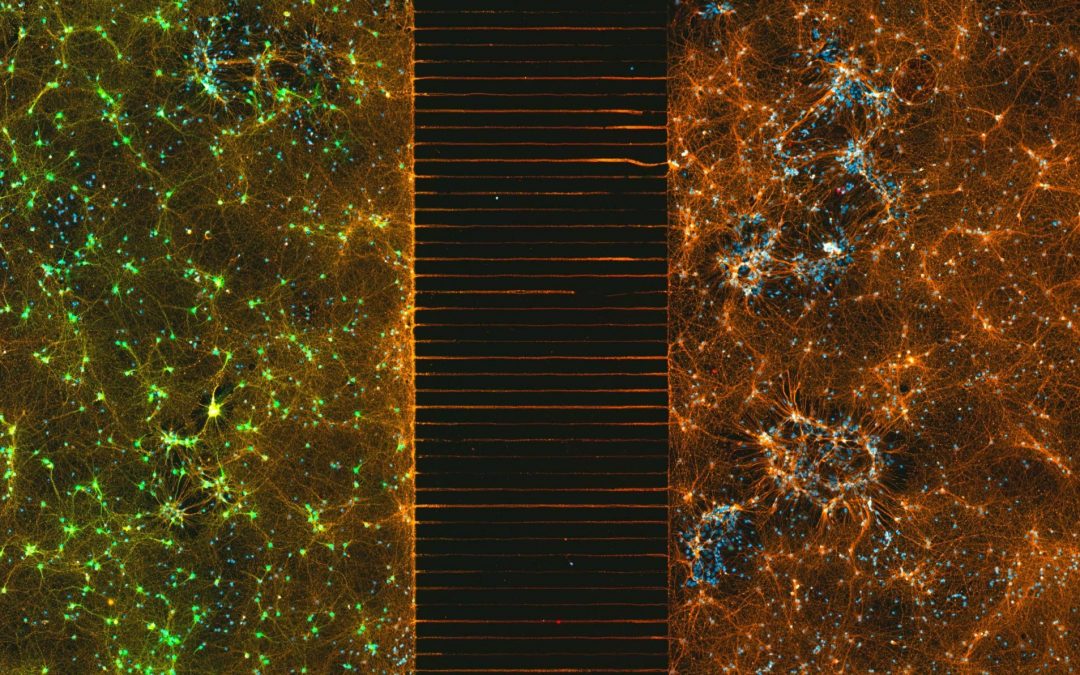 Xona Microfluidics’ compartmentalized silicone device creates a stunning image that resulted in a second place win at the 2021 Nikon Small World Photo competition. Congratulations to researchers at Macquarie University, Esmeralda Paric and Holly Stefen, who received this runner up award.

For this image, Paric and Stefan used Silicone Device SND450s to compartmentalize two populations of neurons. Neurons growing in each compartment extend an elaborate network of processes, called axons and dendrites. Once growth cones of axons and dendrites grow into the microgrooves, they are unable to turn back and they continue to grow into the adjacent compartment where they form connections with other neurons. In this manner, these microfluidic devices allow researchers to “re-create” basic neuronal pathways in a more simplified environment than in the brain. Thousands of researchers world-wide use this platform to study axonal growth, regeneration, and connectivity of neurons. Further, this platform is also used to study how neurons miscommunicate and are impaired in diseases, such as ALS and Alzheimer’s.

Paric and Stefan used 300,000 neurons to populate the microfluidic device. Both separate neuron populations were infected using an engineered virus that encodes a fluorescent protein enabling the neurons to fluoresce. They used a fluorescence microscope to acquire the image with a 40x objective lens.

It is interesting to see that many of the photographs that were honorably mentioned are pictures of neurons and the nervous system. The forth place photograph was taken by Paula Diaz of the Pontificia Universidad Católica de Chile. She took a stunning micrography of an embryonic rat sensory neuron.  Another stunning image was of human brain tumor cells labeled with lentivirus taken by researchers at the University of College London.

The Nikon Small World Photo competition is an annual event that is open to everyone that is able to take images through a light microscope. The judging panel this year included: Dr. Nsikan Akpan, an award winning science journalist; Hank Green, a science YouTube superstar with over 30 million subscribers; Robin Kazmier, a science editor at NOVA;  Dr. Alexa Mattheyses, a professor and director of the high-resolution imaging facility the University of Alabama; and, Dr. Hesper Rego, a professor at Yale School of Medicine.

To learn more about products and research services provided by Xona, please contact us at info@xona.us.